Desmond Seward (22 May 1935 - 3 April 2022) was one of Britain’s best known popular historians. He wrote professionally for over fifty years and was the author of over thirty books of history and travel that range from a study of the Hundred Years’ War to a comparative biography of Napoleon and Hitler. Many have been translated, into twelves languages, including seven into Mandarin.

His latest is The King over the Water: a Complete History of the Jacobites.

He was born in 1935 in Paris where his father was an industrialist – managing director of Timken-Française S.A. – into an Anglo-Irish family who had been wine merchants at Bordeaux since the 1870s, a background that instilled a lasting love of France and the French. (He was a founder of the Association de Lassaye, dedicated to preserving a fifteenth century château at Lassaye-les-Châteaux in Mayenne owned by French cousins.) He was educated at Ampleforth and St Catharine’s College, Cambridge – where he was an Exhibitioner in History. While believing there is no substitute for a first hand study of primary sources, he was also convinced that readability and accessibility are an essential part of the historical process.

In 1991 (in a book of essays on Brooks’s, co-edited with Philip Ziegler), he unveiled the true identity of the model for the great anti-hero Widmerpool in Anthony Powell’s A Dance to The Music of Time. 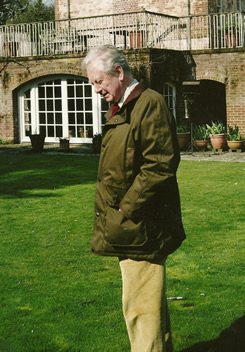